Despite an earlier post about my cynicism for the indieweb, I have been busy trying to integrate some the technology into this website over the past month or so. I have found this link to be pretty helpful in how to do this, but have run into technical issues that have just put me off the whole thing now.

I use a fairly simple workflow to generate this webpage - I write posts in markdown using Atom text editor (which I have come to really like and it allows me to make configuration changes to CSS and templates on the site), and then build the site. I really like using the atom-hugo plugin to aid in this and gives a nice, cohesive feel to creating website content. I have played around with various online CMS’s for creating content and I simply don’t like them much - they always feel slow or bloated or clunky! Also, there’s the extra worry about authentication and keeping the software updated. It’s just not something I really want to deal with anymore. Once I have written a post I can build the site, fire up a SFTP client (in this case I quote like Panic! Software’s Transmit) and copy the public folder to the webserver. A quick bash script later and the folder is moved to the web directory and Apache is restarted. To some people this might be a bit convoluted, but to me it’s a simple way of working and I don’t have to worry about a CMS or backend MySQL database, or PHP, or…anything! 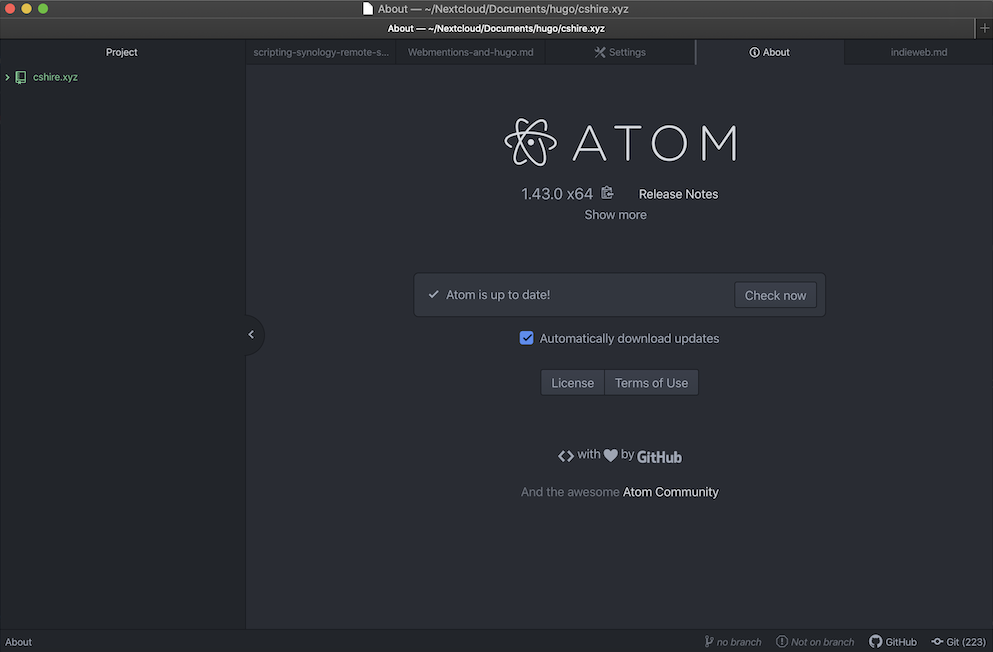 However…indieweb technologies make this a difficult workflow to maintain.

I like the authentication aspect of the indieweb and have got that working (my Mastodon profile shows a tick next to my website link to show they link back to each other, for example). However, trying to integrate webmentions has left me frustrated. My skepticism around the complexities involved with this have not been dispelled, but rather enforced. Almost no tools and guides have been written to allow easy integration of webmentions into Hugo.

Initially I wondered if I could run a webmention server to send and receive them, but that was not as easy as it sounded - much of the software out there is made by people for their own use. I’m not a developer so…that’s me excluded then. Various blogs online suggested using sites like webmention.io and services like brid.gy instead…but that hardly suggests an independent, self-hosted approach.

On top of that, having any live content on a static site is going to be difficult. There was very little explanation on the few sites that tackled this beyond having the site re-generated every hour with a cron script to pick up webmentions that had been sent. This doesn’t really fit in with my workflow either.

In any case, the rabbit hole that various options leads you down tends to end up with the off blog post written by someone who seems to assume you already know a lot about the technology. It’s great that fragments of code are put up on people’s sites, but I honestly can’t get my head around it.

I can see why one would just enable an external commenting section like Discus. It removes so much of these issues.

In any case, delving into these technologies has only left me even more skeptical than I was before. I’m not sure where I’m going to go from here - maybe easier tools will be available in the future. I’m not sure I care though at this point.